Potatoes in all forms and shapes are very high on my list of favorite sides, if not the top of them all. I love how versatile they are… you can cook them, bake them, mash or smash them and everything in between. And the results are always amazing!

Usually, I go for simple baked potato wedges that go really well with any main dish. But when I have more time or want to treat a special someone, I opt in for a more time-consuming but so rewarding stuffed variation of baked potatoes.

Bacon stuffed potatoes are a great side dish, but they can also serve as an easy dinner or emergency main course, when you’re not THAT hungry 🙂 Let me show you how I cook them!

TIP: These potatoes can be used as a side dish with Pork Tenderloin Steaks or Baked Chicken Thigs.

What Potato Type To Choose For Baking And Stuffing?

This is a topic on it’s own, so to speak. There’s like a gazillion of potato types and varieties sold in the stores. And to make it even more consuming, the labeling is different from one country, or even region, to the next. So how to choose the right one? Honestly, I don’t really pay too much attention to this at all.

When choosing potatoes for baking, almost any variety will do just fine. I’ve tried to bake virtually all the potato types they sell in local stores and the results were always great. The only time when I really pay attention to choosing the right potato variety, is when I prepare mashed potatoes, as this really requires the right type to be chosen.

So basically, any type of potatoes you have at hand can be used for this recipe. Yukon Gold, Russet, King Edward, Desiree… starchy, floury or universal… all fine. Maybe just stay away from the most “waxy” types.

How To Prepare Stuffed Baked Potatoes

Watch the video or scroll down for step by step instructions:

1. Start by properly washing the potatoes, you really don’t want any dirt left on them. Cook them in generously-salted water for about 30 minutes. The time will vary based on the size of potatoes used! We want them fully cooked but not falling apart. Make a test with a fork, if it slides in easily, potatoes are ready. Once cooked, put the potatoes into cold water to cool them down.

2. In the meantime, start working on the stuffing. First thing we need to do is to cut our shallots and bacon into small pieces.

3. Roast the shallot and bacon pieces on high heat, until the bacon starts to brown and shallots become translucent.

4. Transfer the still hot bacon & shallot mix into a bowl along with cream cheese and shredded mozzarella and mix them well together. Since the bacon is still hot, the cheese will melt a bit and combine better with the rest of our ingredients.

5. Once the potatoes are cool enough to handle, cut them into halves lengthwise and carefully scoop out flesh from the center part. The more flesh you remove the better, but pay attention to not break the remaining potato and keep the skin intact. As you can see in the photo, I didn’t try to push the limits 🙂

6. Discard about half of the potato flesh and smash the rest with a fork. Add a cube of butter. I melted it to make my life easier. 30 seconds in the microwave will do the job 🙂

7. Add the mashed potato flesh to our stuffing and mix it well to combine. Give it some time, we are looking for an evenly incorporated mix of flavors.

8. Grab a tea or tablespoon and fill the potato skins with our lovely and flavor intensive stuffing. Do not overfill them, it would just flow out during the baking process.

9. Season the stuffed potatoes with salt and black pepper. Do not use too much salt in case you used a very salty bacon type. It’s a good idea to taste the stuffing before adding any additional salt.

11. Preheat your oven to approximately 200 Celsius (400 Fahrenheit) and bake the stuffed potatoes until the cheese turns golden brown. This should take about 20 minutes.

12. Serve with an additional topping of sour cream (1 tablespoon per potato) and sliced scallions to make it look pretty and give it a twist. 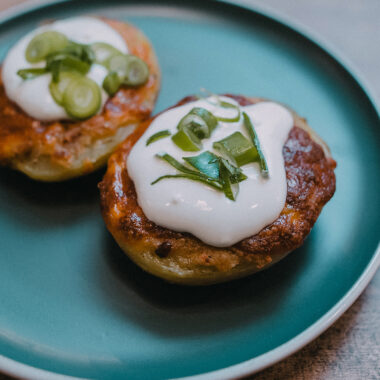 Matej
Everyone loves baked potatoes, but there is something better! Stuffed Baked potatoes 🙂 Let me show you the way I make them. My version uses bacon, mozzarella, cream cheese and onions as the filling.
5 from 1 vote
Print Recipe Pin Recipe
Prep Time 15 mins
Cook Time 50 mins
Course Side Dish
Cuisine International
Servings 5 servings

Keyword baked potatoes, baked stuffed potatoes
Tried this recipe?Let us know how it was! 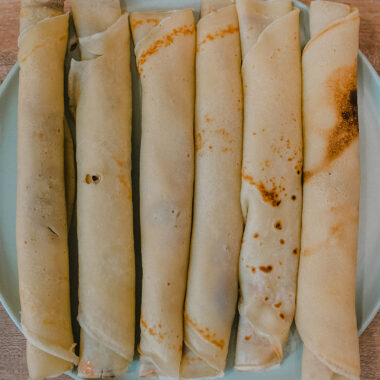 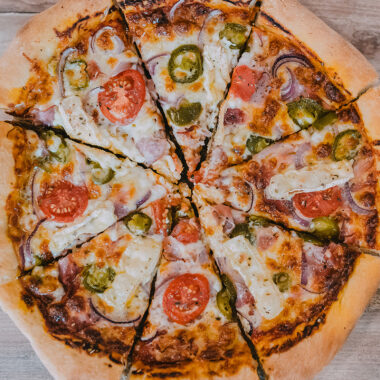