Today I would like to show you how to to cook a lettuce soup called Salota. It’s a traditional, maybe a 100 years old recipe coming from the Goral region, that you can find around the border between the Slovak Republic and Poland.

This region used to be quite poor in the past so the people had to prepare their food from whatever they could grow themselves or use the produce of animals that they traditionally used to keep.

And this soup is no different, we’re gonna use lettuce, milk, heavy cream, soured milk or buttermilk, potatoes and bacon… easy to get and cheap ingredients.

How To Prepare This Lettuce Soup

Somehow, we didn’t take much photos during this cooking session, but we did shot a video so you can follow that for the step by step instruction. But since this lettuce soup is very easy to prepare, I’m pretty sure you won’t have any trouble making it 🙂

1. We’re gonna start with the lettuce. Traditionally, they would use the classic green (Boston) lettuce, but I’m using the iceberg or green ice lettuce as these types retains their crunchiness for longer, when cooked. And that’s what we want 🙂 I’m pretty sure that any lettuce type could actually be used for this lettuce soup.

2. Cut the lettuce in small chunks. No need to cut very finely, just keep in mind you’re gonna be eating the soup with a spoon so the size of the chunks should reflect that 🙂 Transfer the lettuce chunks into a bowl, add salt and mix. The salt will cause the lettuce to release water, so let it sit for a few minutes. You can prepare the rest in the meantime.

3. Next step is to cook the buttermilk on low heat. I’ve used 2litres (8cups) which will make the final soup quite sour in taste and that’s the way it should be. After a while, you’ll notice there are small lumps forming and that’s what we want. We don’t need to boil the soured milk for long, just a few minutes.

4. In the meantime, cut the bacon in small pieces and fry it on a pan. We want the bacon bits to be crispy on the outside but still juicy on the inside, so do not overcook and dry them out. I prefer to use quality smoked bacon with a high meat content percentage.

5. By now, the souered milk should be ready. We need to strain it, as we don’t want the lumps in the final soup. These lumps are actually curd, so you can use that later on in some other dish, if you want to. The remaining liquid is whey and that’s what we will use to make the soup.

Tip: Did you know that you could actually make homemade cheese in a similar way? Check this instant pot Paneer recipe from Shilpa for inspiration.

6. This lettuce soup must be creamy! In a bowl, mix 200ml (roughly a cup) of milk, 200ml (roughly a cup) of heavy whipping cream and 4 tablespoons of flour, all purpose is fine just make sure you’re using a type that has been grained finely. Add this mix to the pot and bring to a boil. Stir occasionally to prevent lumps from forming. Season with black pepper.

7. Squeeze the water from the lettuce chunks, using your hands and add all of it to the pot. Add the fried bacon too, save about ⅓ for later. Keep cooking for a few more minutes, just remember we don’t want the lettuce to cook fully, it has to remain crunchy. Pay attention to this especially when using some other lettuce type, such as Boston lettuce. Give the soup a taste and add salt if needed. Since we salted the lettuce in advance, we shouldn’t need to add a lot of salt anymore.

8. And we are ready to serve. Salota lettuce soup was traditionally served with boiled potatoes, so add some at the bottom of the bowl. Add the soup and garnish it with chopped scallions and fried bacon bits. Enjoy. 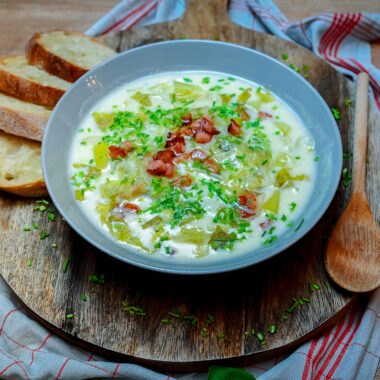 Matej
Salota is a traditional lettuce soup coming from the Goral region, that lies on the border between Slovak Republic and Poland. It's very easy to make and has a specific sour taste that I personally love a lot.
4.17 from 6 votes
Print Recipe Pin Recipe
Prep Time 10 mins
Cook Time 40 mins
Course Soup
Cuisine Slovak
Servings 8 servings

One Sheet Pan Chicken Legs With Potatoes And Veggies 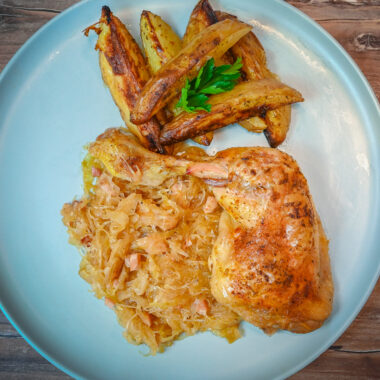