Pork knuckle is one of my favorite meals to order at a Beer Pub or to prepare at home, whenever I have some hungry friends coming over. Fall-apart tender meat on the inside and crispy skin on the outside is what makes this German delicacy special and loved by many.

Even though this dish is believed to originate in Germany, it’s very popular all across Europe, especially in countries like Czech Republic, Slovakia, Poland or Austria. Typical German pork knuckle is made with beer, which gives it a specific flavor, but there are quite a few different ways of preparing these tasty pig knuckles.

What is a Pork knuckle / Pork Hock?

There are two cuts that you can use for this recipe. The front leg knuckle, or the rear end knuckle, which contains way more meat. Do not confuse the knuckle with the pig’s trotter (feet), you need to select the meaty upper part of the leg. The pork knuckle is also known as the pork shank, pig knuckle, pork hock or ham hock.

Another frequent question was: where to buy this cut of emat? Regular grocery stores or supermarkets in the US do not carry these by default, you need to talk to a real local butcher. These guys buy the whole pigs, so they definitely can set some knuckles/hock aside for you. Another great option is to find an Asian butcher, as they usually offer pork knuckles/hocks.

How to cook a pork knuckle / pork hock?

This cut of meat contains a lot of skin, fat, tendons and ligaments which means it needs a rather long cooking time, several hours actually. There are two options that you can choose from, slow roasting on a low temperature or using a shortcut that I’m about to go with today. When cooking a really large pork knuckle, I start by boiling it first which reduces the cooking time by a significant part.

How many pork knuckles to cook?

One large rear end pork knuckle is enough for two very hungry eaters, these are often as big as 1.5kg (3 pounds) each, but the bones take a significant part of the weight. When working with the front leg hocks, expect a hungry male to devour the whole thing 😉

Watch the video or scroll down for step-by-step instructions:

As I mentioned, there are many ways of cooking a pork knuckle, so let me show you one of the easier methods that I’m using quite often. I’m not saying it’s the only right way or the best of them all, but it’s very easy to follow and the final result is very solid and hard to mess up.

Let’s start by boiling the pork knuckle. As mentioned above, this will shorten the overall cooking time quite a lot, which is always welcome. Fill a large pot with water and bring it to a boil. Once the water is boiling, reduce the heat and drop the pork knuckle in.

Add a large onion cut in half, 3 or 4 garlic cloves, 4 or 5 bay leaves, 2 tablespoons of salt, 1 teaspoon of caraway seeds, a teaspoon of black peppercorns and 5 allspice corns. This way, the meat will absorb the flavors while cooking and we will also end up with a simple broth that we will use later on.

Cover the pot and simmer on low for 60 to 90 minutes, depending on the size of the knuckle. Mine took 90 minutes to become tender.

TIP: Sometimes the pork knuckle is too big for the pot and it’s not fully submerged in water, if that’s the case just turn it a few times to make sure it cooks evenly from all sides.

Once cooked, transfer the knuckle to a deep baking dish and use a sharp knife to make cuts into the skin. This way, the skin will become more crispy while baking and that’s exactly what we want to happen. The cuts will also allow the seasonings to get closer to the meat itself and penetrate it deeper and better, which is another positive.

Properly brush the meat and skin on all sides. This is an important step so make sure you don’t skip any part of the knuckle and brush the inside of the cuts too. Should you run out of marinade, simply prepare a bit more, it takes just a few seconds.

TIP: I’m trying to keep this recipe very simple, but you can definitely experiment with the seasonings. Adding some herbs is a good idea, for example. Thyme, rosemary or an Italian herbs mix would all work great.

We need a few more ingredients added to the baking dish. 3 cloves of garlic first, just hit them with a knife and cut into larger chunks. 2 medium sized onions come next. Just cut these roughly and add them to the dish.

And since this is a German dish, we cannot forget some beer, dark is my preferred one for this recipe. I have used almost the full pint since the baking dish was quite large.

Let’s put the broth we made while boiling the knuckle to a good use as well, add 2 or 3 ladles. And lastly, drop in 3 stalks of rosemary to get some aroma in.

Start baking the knuckle at 150 C or 300 F, it will take approximately 2 hours to bake fully depending on the size of the pork knuckle you are working with. Keep basting the knuckle every 30 minutes at least, to make sure the meat doesn’t dry out and to get that beer flavor in.

Flip the knuckle in the middle of the baking process, which means after 1 hour in my case. We are making this to make sure that meat bakes properly from all sides. Otherwise it would just cook in the juices, which is not that big of a problem, but it will taste better when baked evenly.

For the final 30 minutes, turn the pork knuckle skin side up again and increase the baking temperature to 250 Celsius or 475 F to make the skin nice and crisp. Once the skin becomes deep golden brown and lightly charred, we’re done.

I like to keep the sides very simple for this recipe. Fresh bread, horseradish, mustard, pickles and some spicy peppers are all you need to enjoy this German delicacy. Served on a nice wooden board, this knuckle just looks amazing.

You can obviously step it up a notch and prepare baked potatoes and coleslaw salad to serve along with the meat, but I just love to keep it simple.

And that’s it, our fall-apart tender pork knuckle (pork hock) is ready! Thanks for reading and see you next time.

NOTE: Want to try some more pork recipes? These Pork tenderloin medallions are simple to prepare and taste great. Or how about a less traditional cut… Try my Pork collar roast recipe. How about a steak? Did you know that a Pork steak can taste great too? Looking for a soup recipe maybe? This Tomato cabbage soup with pork is awesome.

Want to try some alternative German Pork Knuckle recipes? I like this one from Nagi and Craftbeering has a very nice one too. 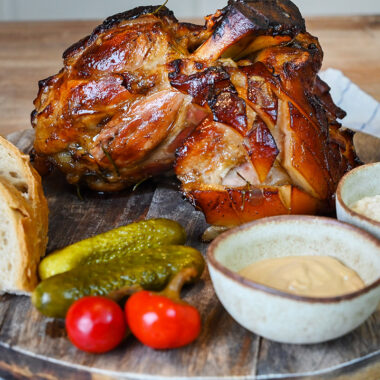